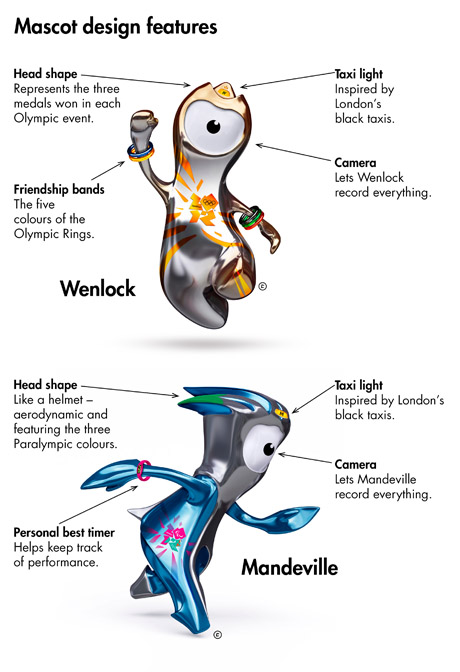 Every Olympics needs at least one mascot.  Apparently, the 1972 games in Munich the Olympics was the first time a mascot was used for the Olympics.  It was a dog (a dachshund) called “Waldi”.  That was 1972! That seems so recent doesn’t it? I would have guessed that the Olympics has been using mascots for centuries … at least! So anyway, once I got over my shock that Olypic mascots have only been around for 40 years I got to looking at the new mascot designs for the London 2012 games.  Here’ s what I discovered.

That’s right, metallic. Forget cute and furry and cuddly.  The design team for the London 2012 mascot designs has gone into the future and come back with mascots that look like characters from a science fiction movie.  Their names are Wenlock and Mandeville and they almost look like a couple of electronic gadgets come to life.  Think of your silver iPod that grew legs, arms and a head.

Over at the 2012 mascot design team they decided to showcase ideas that are really outside the box and we commend them for taking creative risks.  The mascot colors and textures break into new territory and successfully usher in a who new look for character and mascot design for years to come.  Taking this kind of chance shows how confident the designers are at presenting these two mascots to the world complete with back story and video to boot! You can watch the video of their story and more over at the London 2012 site.